NOTE: Make sure to play the game in full screen as there are some strange mouse input issues

In Scout, you have to fight enemies and plan your attacks to avoid running out of ammo as each weapon has only 1 magazine. These weapons are quite deadly and follow the rules of physics. You also have access to a drone which can be used to plan out your attacks so that you can stay safe. Additional abilities can be used to aid you in combat. Enemies will continuously spawn in which is how you will restock on your firearms. The main focus of the game is killing as many enemies as you can before being killed.

Scout is a game that I have developed for my final major project at college for approximately 12 weeks which is heavily inspired by the Watch Dogs series (as I really love these games and felt like it would be a great opportunity to base my project on them). It consists of 7 main mechanics which are:

My specialism is programming which meant I went into great depth to ensure each mechanic was full of details and really pushed my skills to the max. I began this project by doing an extensive amount of research and planning to fully prepare for the development. The work itself came to life by starting with prototyping then working up to the planned outcome, building up each main mechanic then expanding on them once the foundations were built.

A more in depth dive into the entire development process can be found below in the downloadable files.

I managed to get this project all completed ahead of the deadline as I was careful with my time management. This then gave me more time to polish everything off, fix bugs (leaving only 1 bug which wasn't programming related), improve my documentation and finalize everything off. I've also really improved with my coding and have dived into mechanics and code which I would have otherwise seen as intimidating. My programming skills have really improved which has helped me write much neater, cleaner and optimized code.

I feel like I could have made my main mechanics even better had I done more research into all the possibilities that these could bring. It would have also been nice to have a slightly bigger focus on the art side of things however this wasn't my specialism so it wasn't much of a priority.

Every other asset apart from the ones mentioned: mine

DISCLAIMER: You are free to take this game idea and do whatever you want with it. There is no copyright protection although I would greatly appreciate it if you gave me credit for the inspiration :)

Source - Unity project folder with source code, assets and everything else Unity related 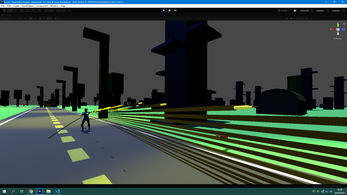